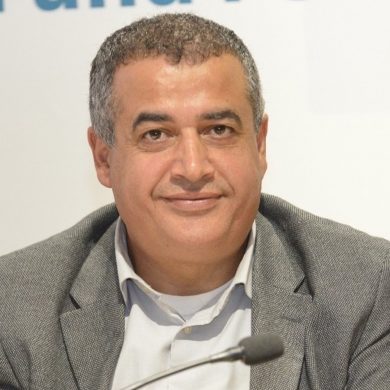 ​Associate Professor Fraihat has published extensively on Middle East politics, with articles appearing in The New York Times, Los Angeles Times, the Financial Times, and the Christian Science Monitor, Foreign Affairs, Foreign Policy, Alhayat, on the CNN and Al Jazeera websites, and elsewhere. Fraihat received a doctorate in conflict analysis and resolution from George Mason University in 2006. He is the recipient of George Mason University’s Distinguished Alumni Award (2014) for his achievements in the field of conflict resolution.

He consulted for international organisations on subjects of his research interest such as conflict resolution and post-conflict reconstruction in the Arab world, with a particular emphasis on conflict management and mediation, transitions, national reconciliation, national dialogue, and institutional reform.

Selected publications by Associate Professor Fraihat include: “Preventing a New Displacement for the Palestinian Double Refugees?” Harvard Journal of Middle Eastern Politics and Policy, “Keeping Iran and Saudi Arabia from War: Getting Riyadh and Tehran to Talk,” Foreign Affairs, “For the Sake of Peace or Justice? Truth, Accountability, and Amnesty in the Middle East “, in Transitional Justice in the Middle East, University of Oxford Press/Hurst, “Can the Organization of Islamic Cooperation (OIC) Resolve Conflicts?” Conflict and Peace Studies,” and “International Intervention, Justice and Accountability in Yemen,” European Council on Foreign Relations.