The Middle East Studies Forum invites you to the webinar on
‘Iranian Ways of War: From Cyrus the Great to Qasem Soleimani and Beyond’
presented by Associate Professor Ahmed S. Hashim (Deakin University) 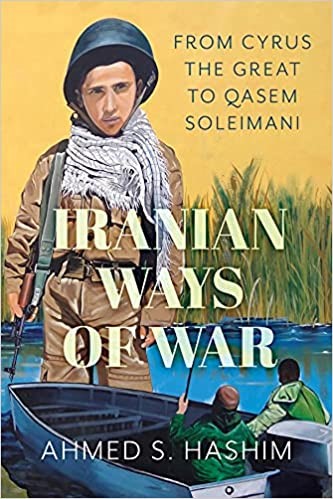 Iran has a long military history going back almost 3000 years. This talk is based on extensive research addressing the history of how Iran fights and why it fights the way it does from ancient times to the present. It looks at the myriad factors that have affected and continue to affect its ways of war. How each people fight and why they fight the way they do has been an enduring puzzle since the dawn of ‘civilized’ warfare. There are no studies of the Iranian way of war from the past to the present. While a way of war is often shaped by the geographical conditions that each nation or people is dealt with and by the history they experience, it can also change over time due to changes in the geopolitical, technological developments, political system and the nature of the government, strategic cultures, and ideology, etc. It would be ahistorical to suggest that there has been one uniform Iranian way of war from the emergence of the Iranians around 500 years before Christ to the present. The focus of attention, however, is the ways of war of the Islamic Republic of Iran from the Iran-Iraq War (1980-1988) to the present proxy and shadow wars with its adversaries in the Middle East. In this talk, I will summarise my arguments and tentative conclusions of my forthcoming book on Iranian ways of war.

Ahmed S. Hashim is Associate Professor of Strategic Studies in the School of Humanities and Social Sciences. He studied Politics and International Relations at Warwick University, Coventry, UK under Barry Buzan and Robert Skiddelsky where he received his B.A. He received his M.A. in Political Science at MIT where he studied Strategic Studies, International Relations and Comparative Politics with Hayward Alker, Lucian Pye, William Kaufmann, and Barry Posen. He received his PhD from MIT in Strategic Studies. He worked at the Center for Strategic and International Studies (CSIS) in Washington, D.C. where he focused on security issues related to the Persian Gulf. He moved to the Center for Naval Analysis in Virginia where he worked on U.S. national security issues as they related to the Persian Gulf and the Indo-Pacific regions; specifically on interoperability and joint warfare and the evolution of the Chinese Navy (the PLA-N). He then worked for the United States Department of Defense where his work initially focused on future warfare matters, security in the Persian Gulf and Indo-Pacific regions. He also developed an expertise in Terrorism and Counter-Terrorism studies, Insurgency and Counterinsurgency and helped develop strategies for the U.S. military to prosecute the Global War on Terror. After 11 years, he moved to Asia to further his interest in Asian security issues. He worked at the Rajaratnam School of International Studies and the Singapore Armed Forces Training Institute where he taught courses on Defence Analysis, Military History, Counterterrorism and Insurgency and Counterinsurgency. He contributed to the pre-deployment education of the Singapore military prior to deployment in Southwest Asia. Hashim also helped set up and headed the Research and Integrity unit of his department to ensure academic integrity and ethical conduct. After a decade in Singapore, Hashim moved permanently to Australia to work at Deakin University and the Canberra Centre for Defence Studies. His focus of attention for the coming years will be on the evolution of security issues in the Indo-Pacific particularly as they pertain to the security of Australia, contribute to ensuring the security of Australia, pursue the study and teaching of future war and grand strategies and improve his Mandarin and Russian language skills.